As far as I know, my boss isn’t chomping at the bit to give me a 10K raise or more work from home (WFH) days, but given the option I’d say no to the cash and yes to the WFH time. 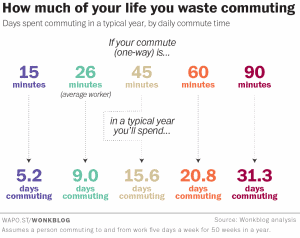 Given that my commute is about an hour each way (give or take 15 mins depending on traffic) I could actually spend an extra two to three weeks on vacation for the about of time I spend commuting in a year. Pause for a moment while I let that settle in…. ouch.

Not only am I spending potential beach time on the highway, apparently commuters suffer all kinds of health issues (not surprisingly) such as heart disease, obesity, high blood pressure and depression. We also have shittier marriages, thus higher divorce rates and our kids are more likely to have emotional problems.  Awesome! Thank God I don’t have kids.

Oh, and as if that isn’t bad enough, commuters are apparently less likely to vote (except me). Given the political circus we’re living in here in the US, this one stings the most right now.

The Life-changing Magic of Working from Home.

I do get the freedom to work from home occasionally.  It’s a privilege I try not to overuse for fear of having it taken away. But on those days where I do work from home, here’s what happens:

Oh, hell yes. First off, the realized benefit of that 10K is actually only about $6,500 (or less) after taxes. If it’s one extra day a week, that’s a savings of:

Now given that a single day working from home saves me 3 hours in commute and getting ready time (don’t judge) x 50 weeks = 150 saved hours annually.

I know that seems like a lot of money to some (and it’s nothing to sneeze at for me), but frankly, my time spent doing all the things I just listed is worth more than an additional $33 per hour for 150 hours throughout the year, not to mention my health and happiness.

This is a number we all have to come up with on our own, but I’m pretty sure there’s nothing short of an additional $40K per year that would make me want to commute more day a week into the office.

What about you? Would you grab the additional cash and suck up the commute? 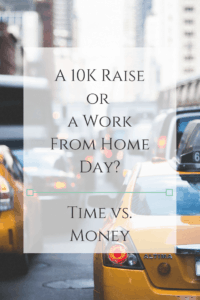 « Previous Post
Adventures in Minimalism (there’s no turning back).
Next Post »
9 Happiness Killers to Quit or Ditch