Inspired by Cait Flanders, I took on a self-imposed spending ban last month that will finish in just a few days.  What I’ve learned from this experience, the way I’m influenced to shop and the impulse I have to hit the “buy” button, has been truly enlightening. 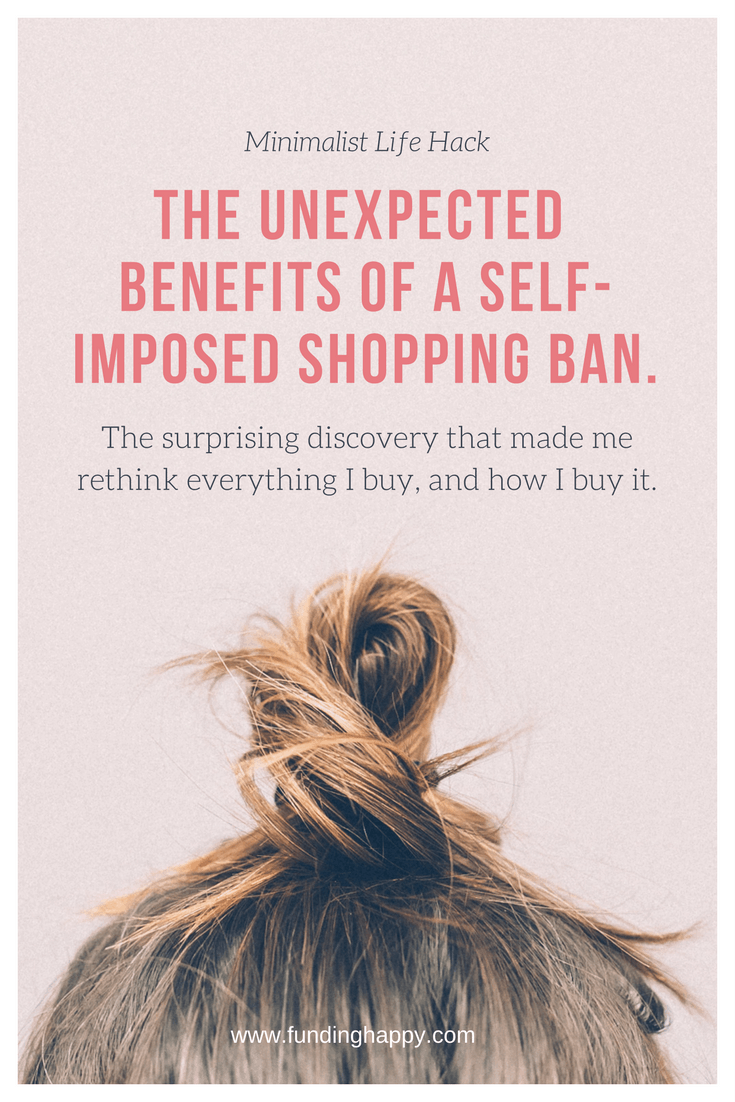 Overall, this wasn’t too much of a challenge for me. Maybe that’s because I’m already stocked to the hilt with makeup, clothes and toilet paper. Or maybe it’s because I’ve come far enough in my minimalist journey that I really don’t crave that much anymore. Either way, it was a bit of a non-event for me.

That said, the first couple of days were really hard.

As I started my shopping ban, I pledged to take screenshots of all the things I would have normally purchased on impulse and then revisit them after the ban to see if they were still something I wanted to buy. Surprisingly, most of these impulses came from Instagram. It appears that I’m a sucker for the Instastory swipe-up-to-buy feature and I follow a lot of fashion bloggers who use this tool often.  Because the enticement to buy was coming from my favorite bloggers, it didn’t occur to me at first, but I started to realize I was being subjected to a whole new set of make-shift TV commercials that I’ve tried hard to avoid by only watching shows on Netflix or Amazon.

Here are just a few of the things I had the urge to buy, but didn’t. I am pretty confident I won’t go back and pick them up once the ban is over. 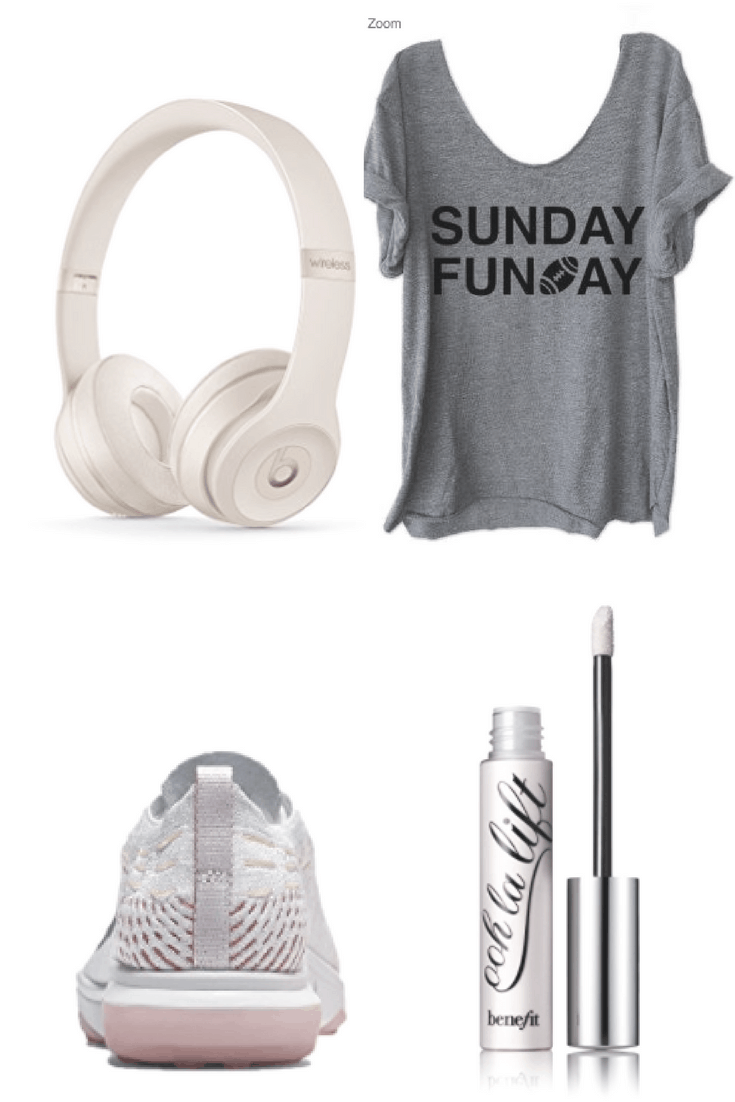 After the first week, an interesting thing happened…

After the first 7 to 10 days passed, I stopped screen-shotting things. I didn’t feel the same interest in stuff. I started thinking about all the jeans, electronics and hair product I already had and realized the idea of more was off-putting. I was starting to build a new mental muscle around appreciating things, but not needing to acquire them.

But I did break my ban

I still have 6 days left of my shopping ban, but I broke it today. I bought two large bottles of my favorite shampoo (because the price is better in bulk) and a suitcase for a trip I’m taking next week. I feel okay with these purchases because without buying them in advance of my trip, I’d be kinda hosed.

So, I may not have been 100% successful with my ban, but the key behavior I developed from this experiment was the habit of pausing before clicking the buy button. I’ve realized how numb I’ve become to the process of buying online so much so that I end up purchasing unneeded things on impulse. I’ve also become more aware of how many of my purchases not only fail to improve my life but often hinder it, and so I’m less likely to accumulate mindlessly.

I never deprive myself

The more I step away from impulse consumption, the more I see the vapid impact it has had on my life. I’m able to see a better version of my life that still includes things in it, but only things that have meaning or add a ton of value. I’m ashamed to admit that most of the things I’ve acquired in the last 10 years haven’t brought enormous value.  That said, if there’s something I really, truly want, of course, I’m going to get it. If something brings me joy (like hair extensions or yoga pants) then I’m 110% happy to buy it. I’ll never deny myself impactful pleasures because that’s the kind of thing that my money should fund.

The opposite of mindless Amazon-1-click shopping is the idea of slow acquisition. I first heard the term on The Minimalist podcast and it immediately struck a cord. How many of us practice slow acquisition these days? Between Ikea and Overstock.com, It’s so easy to furnish an entire house in 48 hours, but with what? Particle board furniture and pictures of nature scenes we’ve never see in person? What if it took years to furnish a home, with just the right pieces that were beautifully designed and also had a ton of functional value? What would that home feel like compared to the 48-hour Ikea pop up house? Imagine how different each space would feel to live in. 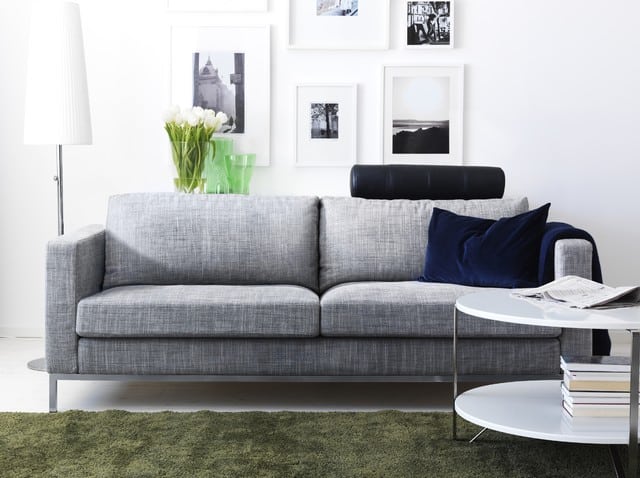 The template Ikea living room.  Not terrible, but certainly not personal.

More and More I Want Less and Less

The funny thing is that 10 years ago when I first started blogging, I talked about minimalism and the idea of consuming less. At the time, it was spiritually motivated by a deep concern for the environment, and while that’s still important to me, I am wise enough to know that these concerns aren’t personal enough to others to drive massive change. But fortunately, happiness, quality of life and financial freedom are very motivating aspirations for many people, and even though the commitment to consuming less is driven by a different aspiration, the end result is still beneficial to the planet.  It’s a win-win with no downside.

It’s the cyclical moments in life that really show me how far I’ve come on this journey more than the day-to-day personal growth. Once a year I go home to visit family and friends and while I used to be consumed with optimizing my trips to Canada to buy more for less, I now focus on bringing less, shopping less and focusing my energy on time well spent. It’s the year-over-year mindset shifts that stand out more than the day-to-day baby steps and I’m always grateful when I’m reminded of how far I’ve come.

The one thing I’ve learned, not just through this spending ban, but also through this entire refocus on consuming and owning less is that there’s always more ideas, habits, and inclinations that I’m challenged to grow from. My closet isn’t a perfect display of 33 garments. It’s still a jam-packed jumble of clothes I rarely wear (albeit it’s getting better). I still have too much stuff and the inclination to acquire more is always there. But over time, I gain awareness, understanding, and appreciation for less. As that grows, my better choices and habits continue to improve.

How to Conduct Your Own 30-Spending Ban

It’s so simple.  Just commit to not buying anything but necessities for 30 days.  Your definition of what that means might be different than mine, but I encourage you to make it challenging enough that you’re forced to think creatively and do without some creature comforts, but not so challenging that you’ll give up before the ban is over.

For me, this ban included buying anything except:

Things I wanted to buy in the moment, but did not:

Looking back at this list, I’m amazed at how much I could have purchased that I didn’t really need.  There’s at least $500 worth of product on this list and none of the items appeal to me just weeks later.

So are you ready to start your shopping ban?  The best advice I can give you is to commit to doing it right now and not to put it off as you may feel pressure to pre-buy items you’ve been contemplating and that’s a trap you don’t want to get caught up in!  Good luck and let me know how it goes!

« Previous Post
How much of what you spend money on has value in 10 years?
Next Post »
25x Rule: The simple math for deciding whether or not you can quit working for good.