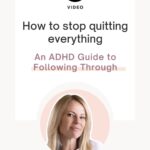 Do you find yourself getting excited about ALL the things, only to then quit a few months later because you lost interest? Yeah, me too.

In retrospect, that was the biggest sign that I had ADHD, was (and still is); my ever-changing interests and attention span. I have so many (too many) interests and curiosities, and as a result, I feel like I’ve spent my entire life just sort of running in a variety of different directions without making a ton of progress in any one direction, or at least that’s the way I thought things were.

In retrospect, I realized that’s not the case and that’s really the takeaway for today’s post.

There’s this great Steve jobs quote that you’ve probably heard before, but it’s worth repeating.

I thought that was a great way to start off this post because in retrospect, I spent a lot of energy doing things that felt like they’ve amounted too much and as a result, I’ve spent a lot of time in overwhelm and burnout.

However, at this stage of my life, I’m starting to see how my past interests have created serendipitous opportunties that have now started to make a lot more sense. Just like the Steve jobs quote suggests.

Does this resonate with you? We hear that life is not linear, but it seems like everyone else can move from point A to point B without too much trouble.

Meanwhile, those of us with ADHD have interests and life experiences that have no linear direction. Instead, it goes all over the place and looks a bit like a virus emoji 🦠

And that’s our attention span – multi-directional, yet very short lived.

If that feels like you and you felt a little bit frustrated, then here’s a few things to consider…

Is there something specific that you’re trying to go after?

Very often we haven’t identified a clear destination for ourselves, so we feel adrift. We try a bunch of different things, but nothing sticks because we don’t know what we really want.

In this case, take some time to think about what you want for yourself. Having a goal and purpose, even if it changes over time, will give you something to focus on.

If you do have something that you’re trying to get to, but you don’t feel like you’re making enough headway. Then take inventory of all the attention distractors in your life, and think about where you can start to eliminate them. The more you can centralize your energy and focus, the further you’re going to go.

I know that’s pretty obvious, but very often, because we’re just so distracted by new and interesting things, we end up getting derailed, discouraged and then we quit.

Are you going after what you truly want, or what you think you “should” do?

I have learned this lesson the hard way. Running after “shoulds” is a recipe for disaster when it comes to ADHD. Yes, there are things we need to do as adults and there’s no avoiding that, but if you’re making the big decisions in your life based on shoulds, I can almost guarantee it will be a painful win or a total loss.

The first sign that you’re pursuing a “should” is that you’re motivated by an extrinsic goal. Extrinsic motivators might include money, power, fame, etc. It’s not that those results are bad, but when we think the journey will be worth the result, we’re often disappointed.

However, when we’re driven by intrinsic reasons, like real passion, interest or curiosity, the journey becomes the main reason we keep doing what we’re doing. As a result, we’re much more likely to stick with it.

Be okay with quitting things

Exploring interests is just a part of life. Trying new things and seeing if it works for you, is a good thing. You can either keep them in your life, or decide they’re not for you and move on. That’s what makes you the well-rounded, interesting person that you are.

However, many of my clients get frustrated with quitting because they think it makes them look scattered or flakey. They also complain that they sink a lot of money into new interests, only to lose interest in them very quickly.

If this is you, consider ways that you can experiment with new interests without being financially committed to it. Create boundaries for yourself where you don’t invest in hobby equipment until you’ve tried it for a while and it feels like a good fit. So this could mean renting or borrowing equipment instead of buying.

There’s a lot of shame around not following through or trying something and realizing that it wasn’t quite for them or getting bored with it. Where really I come back to this idea of there’s nothing wrong with trying a bunch of things.

It makes you an interesting well-rounded person and a lot of those things that you try will eventually come around and be incredibly useful when you find, “your thing” or your two or three things, because we don’t often have just one thing that interests us in life.

Planning is the antidote to quitting

As I mentioned earlier, when we have too many directionless interests, we tend to get derailed easily, then discouraged. From there, we’re very likely to quit because we haven’t seen much success, and we’re not even really sure what we’re doing.

Not a great feeling is it?

So how do we avoid quitting everything with our ADHD brains?

The best way to avoid this outcome is to make a plan for how you’re going to explore a new interest. As we already discussed, you want to start with a clear destination in mind. It should light you up and you should feel intrinsically motivated to move ahead.

Once you’ve checked those boxes, it’s time to put your vision into action. Start with adding your interest to your calendar. Plan for it weekly, monthly and quarterly. Also ask yourself, are you connected with other people who share a similar interest? This is so important for accountability and encouragement.

If you’re not planning your life, you’re living by default and you really want to live by design. So make a plan. Have a direction, even if it’s just a loose one. Be open to trying different things along the way and trust that at some point. It’s all going to make sense. Because at some point it will.

« Previous Post
Is Perfectionist Anxiety Stopping you From Getting Started?
Next Post »
ADHD Procrastination - Outsmart Your Lack of Mojo